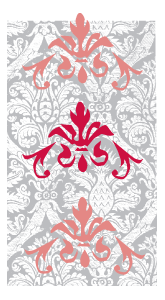 As we read and create music, we weave through a I‑IV‑V tapestry of primary chords. At Piano Adventures® Level 5, we ensure that the student can see and feel this structural tapestry for each tonal piece.

“Why learn scales?” students ask. Our answer? A scale reduces 88 keys to seven. Five keys are eliminated in each octave (12 chromatic tones minus five leaves seven diatonic scale steps), and each of these seven tones retains its own meaning regardless of octave.
So when playing the Pachelbel Canon in D, for instance, we can ignore one third of the keys on the keyboard and visualize a simple thread of the D major scale weaving through seven tones per octave, across the entire keyboard. Whether reading or improvising, attention is delimited to this D major thread for security, predictability, and confidence.
Consider When the Sun Rises … from the Level 5 Lesson Book (p. 36). The piece is essentially an “improvisation” in B‑flat major, excepting a brief color detour with the A‑flat in measures 6–9. By delimiting the keyboard to the notes of the B‑flat major scale, and imagining this “scale thread” of two black keys interspersed with five white keys, the piece becomes easy to read and easy to play. Furthermore, there is little chance of a bad note sounding because the scale tones all relate to the tonality. 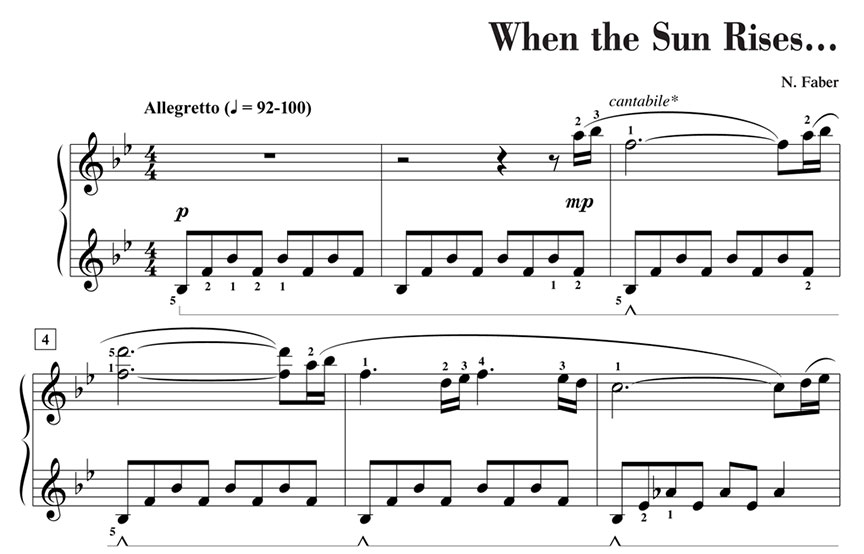 The last three measures of this piece offer opportunity for improvisation. Taking the short rhythmic motive given, explore any tones from the B‑flat major “thread.” It is surprising to see—and to hear—how easy this can be. 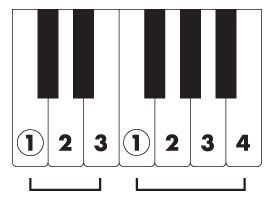 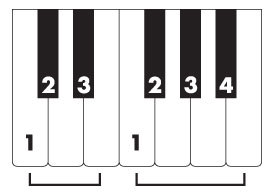 Scales are invaluable, but it is the combining of scale tones in thirds that gives tonal music its harmonic structure. Recalling our metaphor, we use the scale “thread” to weave the chord tapestry. First and foremost, we weave the tapestry of I, IV, and V chords—in all inversions.
As Level 5 progresses through various keys, each piece is preceded by a short etude, disguised by a title. Coral Reef Etude, for example, opens the book as a primary-chord study in C, featuring all inversions of I, IV, and V. To maximize the effectiveness of this and similar etudes:

Coral Reef Etude is the harmonic grid, the primary-chord tapestry. It is essential for the student to grasp these chord patterns that combine the student’s understanding of primary chords with understanding of chord inversions. This is the bridge to the intermediate repertoire. 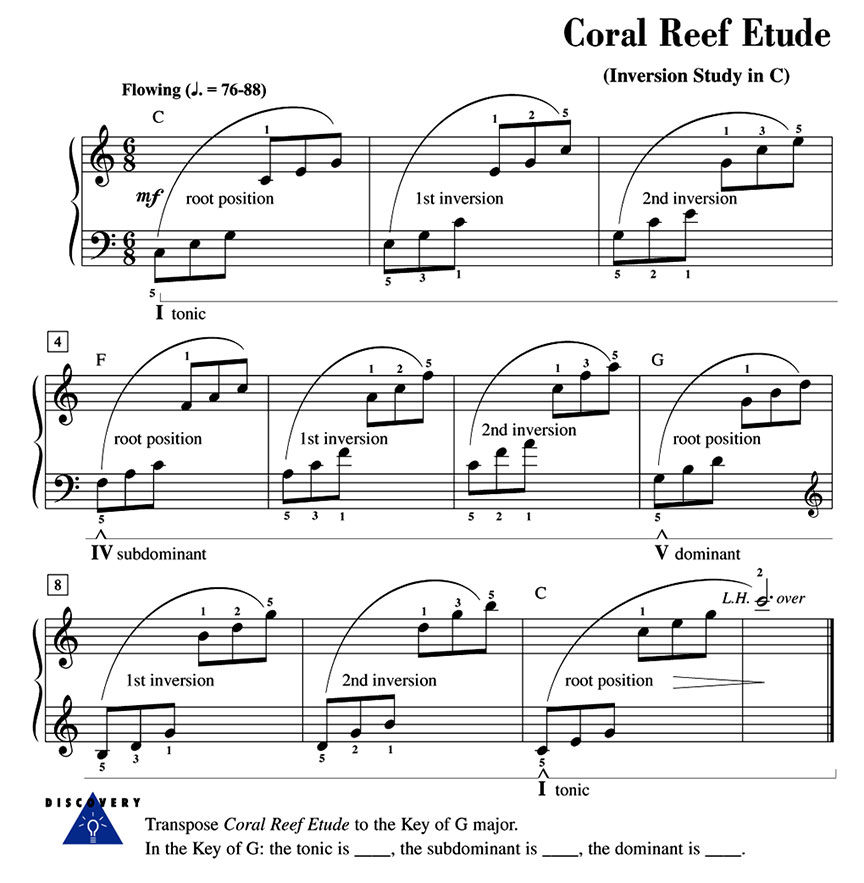 Notice that Blue Etude (p. 11) is a primary-chord etude in F, preparing for Tumbleweed Blues (p. 12). Similarly, Rolling River Etude (p. 14) drills the primary chords in A major using the LH pattern of Shenandoah (p. 15). As the student progresses to new keys, come back to Blue Etude, transposing, for example, to B‑flat (especially for those pre-jazzers who will be playing in B‑flat with brass players). Revisit Rolling River Etude as preparation for the pieces in C minor and G minor when these are encountered later in the book.

A look at Piano Adventures® Popular Repertoire Level 5 gives insight into the importance of chord comprehension.  Consider Elton John’s Candle in the Wind. The entire verse (mm. 5–20) simply alternates between I and IV chords (G and C in the key of G major). Yet, how many students fail to recognize this simple chord pattern and struggle to decode 150 notes instead of two chords? So we pair the arrangement with an “Accompanying Activity” that drills I‑IV chords in a pop accompaniment style. The arrangement then reduces
to simplicity.
In a different context, we again explore the repetition of I and IV in Wind Beneath My Wings. The corresponding activity page, titled “The Bass Beneath My Wings,” explores aural recognition of the bass line and various accompaniments for the I‑IV chord progression.

The Power of Primary Chords

In the Level 2B, we discussed “The Power of Primary Chords.” Indeed, one can’t overestimate the value of recognizing fundamental harmonies—for reading, for memorization, and for musical creativity. We recapitulate this concept here at Level 5 by weaving an elementary understanding of primary chords into a patterned “I‑IV‑V Tapestry” that includes chord inversions.
The warm-up etudes in Piano Adventures® Level 5 provide some very effective tools. But learning the etudes once, in the key written, will not make a real musician. We need to roll up our sleeves and help students transpose these etudes to many, if not all, keys. Do so in conjunction with learning each new scale and each new piece. With this higher expectation, we can indeed develop a “I‑IV‑V Tapestry” that won’t fade by next week’s lesson.

Piano Methods for All Ages

Basic Piano Adventures
(ages 6 and up)